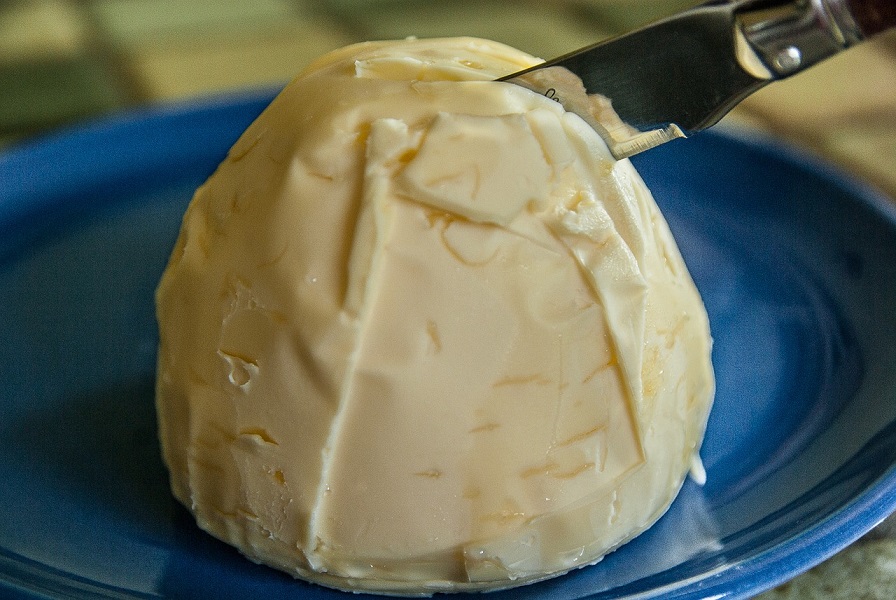 No messy churns or weird equipment needed for this: Get a jar, some organic cream and you're good to go!

For starters, most commercial butter comes with artificial preservatives to extend its shelf life, and a bit of yellow colouring, to give it more allure. While hormones found in cows that are treated to make them lactate (produce milk) regularly, there is some discussion as to whether the long-term effects of hormone treated milk is affecting the children who drink it.

While growth hormones called bovine somatropin, such as RBST, BST, RGBH or any other artificial growth hormone are illegal in Canada, the EU, Australia and Japan, some dairy farmers may still use Posilac, a Monsanto product to boost milk production in their cows.

On September 30, 2010, a U.S. court of appeal presented that there is a "compositional difference" between milk from RBSG-treated cows and untreated milk, namely that there is less nutritional value in hormone-boosted milk, and has "increased somatic cell counts." (That means more pus in the milk from the cows' teats.) While it can be filtered out, the overall effect was milk with lower quality and less nutritional value.

Other tests have also revealed that milk that was expressed from hormone-treated cows spoiled quicker; some cite the amount of hormone that may be in the milk, and others, the increased somatic cell count, but even the court of appeal admitted that this resulted in a poorer quality of dairy.

What to Use When Making Your Own Butter

Making your own butter from organic cream will not only make it last longer than the stuff found on your grocery shelves, it's also a terrific activity to do with children. You don't have to worry about them breaking anything or hurting themselves on sharp equipment. If you have cream, a mason jar and fifteen minutes, you should be good to go. Alternatively, you can also use a blender or a food processor on low.

Pour the cream into the jar – if you want salted butter, you can add it at this stage. The jar should have room at the top to allow the cream to move and separate. Grab the jar and shake it steadily and continuously for 10 minutes. If your hands get tired, hand the jar to another person who wants to take their daily frustrations out on the mason jar.

If you are using a food processor or mixer, use the pastry blade or a whisk attachment. Press "blend" or just keep it at a steady, rapid pace. The mixture will whip, then seize, then break down, separating into solid and liquid parts. When you can hear the solids thump against the sides of the jar or the bowl, this is the time to strain off the liquid.

The liquid can be saved: This is buttermilk, a wonderful ingredient in pancakes, used as a marinade for poultry, or in other recipes. Buttermilk can be stored in a mason jar in your fridge until you're ready to use it in a recipe, for up to two weeks.

The freshly made butter you've just strained can be mashed with a potato masher until it's all blended together, and patted into a small ramekin for serving.